The Rivers State chapter of the Nigeria Association of Women Journalists, NAWOJ, has kicked off the 16 days activism on fight against gender based violence, GBV, in the state.

The state chairperson of the women branch of the Nigeria Union of Journalists, NUJ, Mrs. Susan Serekara-Nwikhana in an interview with TNN reiterated the need for strengthened actions, resources to address the menace.

Serekara-Nwikhana charged parents, teachers, professional organisations, religious leaders, security agencies and concerned citizens of the country to take definite stand against sexual and gender based violence in order to end the menace.

According to her, “16 days of activism, the theme for this year says: Orange The World, Ending Violence Against Women And Girls. Why gender based violence can happen to anyone, some women and girls are particularly vulnerable, for instance young girls employed as house helps. Violence against women and girls continues to be an obstacle to achieving a quality development and peace, as well as the fulfillment of girls and women human right.

“NAWOJ Rivers State believes that strengthened action by the government through more investment in women and girls will go a long way to end violence against women. This 16 days of activism is an expression that gender based violence though not inevitable can and must be prevented by tackling the root causes, transform harmful social norms and empower woman and girls and the provision of survival centre having the essential services across policing, justice, health and social sectors, sufficient financing for the women.

“Violence against women and girls having reached pandemic proportion especially with COVID-19 hit, the Nigeria Association of Women Journalists, NAWOJ, Rivers State is calling for strengthened actions and resources to address the menace.

The Rivers NAWOJ boss noted that as lockdown measures were implemented  to stop the spread of the coronavirus, violence against women, especially domestic violence intensified  following the closure of schools. She added that economic strains left women and girls poorer, out of school and out of jobs, making them more vulnerable to exploitation, abuse, forced marriage, and harassment.

Serekara-Nwikhana regretted that formal reports of domestic violence have decreased as survivors find it harder to seek help and access support through the regular channels.

She further noted that prevention starts with believing survivors, adopting comprehensive and inclusive approaches that tackle the root causes, and sufficient financing for the women’s rights agenda. 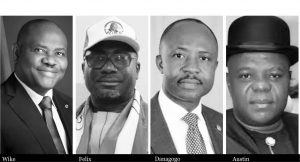